Unadilla 450MX comeback appears on the cards for Wilson. 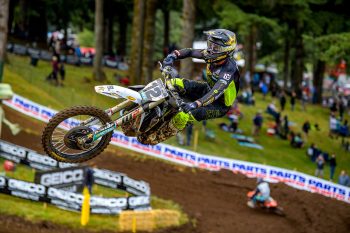 The fill-in stint of Shane McElrath at Rockstar Energy Husqvarna has come to a close following round eight of the 2022 Lucas Oil Pro Motocross Championship in Washougal.

McElrath was drafted into the team to replace the injured Dean Wilson, initially to compete in just the opening four rounds of the series in 450MX.

However, it was later revealed that teammate Malcolm Stewart would also be sidelined, until at least around six, leaving McElrath the sole representative of the squad in the premier class from Pala through to Washougal.

The number 12 finished P13 overall at round eight courtesy of 14-10 moto scores, with his strongest result of the season being fifth in moto two and Thunder Valley. It is unclear what McElrath’s future plans are.

“Washougal was a tough race day,” McElrath said. “I had pretty good qualifying session but as the track developed more, I struggled on finding a flow out there.

“I’m happy with my effort and the progress that we’ve made. It’s not easy out there. I’m content with where we’re at but I know I have some more to give and I’m going to keep working regardless of what the future holds. I’m just happy for this opportunity and it’s definitely taught me a lot, so I’m excited.”

A return of Stewart has not been officially confirmed, however, Dean Wilson has indicated that he will make a comeback when the series resumes at Unadilla on 14 August by sharing footage on social media with the caption: ‘just double checking I can still whip before we go to [Una]dilla.’