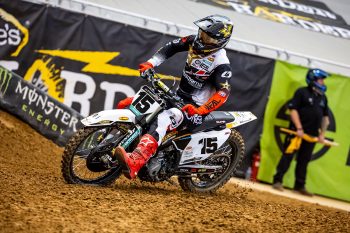 The fall in the whoops was the first blemish to Wilson’s run of consistently finishing events throughout the 2022 season, the number 15 one of a few riders to do so in the premier class prior to round 13.

“First race of the night for me, second lap, I went through the whoops, I was in like seventh or something, and my rear wheel just hit an edge,” Wilson explained.

“It shot me left, I was going pretty fast into the whoops, and then it shot me into the hay-bales. I hit this little wall thing. I hit this wall and I had to eject from the bike, then I’m lying there and I feel really, really warm.”

Wilson lost a lot of blood in the incident and suffered a deep laceration to the glute. He added: “We get to the hospital and I’ve got five doctors playing with my butt, I went for two operations that night and I have another operation tomorrow.

“Kind of a weird injury, I’ve never had it before. There’s some light at the end of the tunnel here, hopefully we have a good surgery tomorrow and hopefully can be out by the end of the week.”

Wilson currently sits eighth in the 450SX points standings, with a return date to competition unconfirmed.