Stewart to sit out opening half of Pro Motocross series 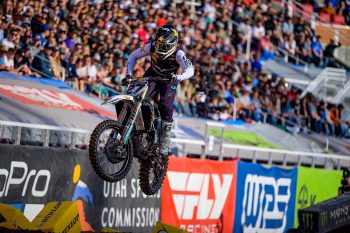 Rockstar Energy Husqvarna has confirmed that Malcolm Stewart will sit out at least the first half of the 2022 Lucas Oil Pro Motocross Championship while recovering from a knee injury.

Stewart, who finished third in the 450SX standings, sprained his knee in St. Louis and further injured it in the Monster Energy Supercross finals at Salt Lake City.

“What a year! I want to thank the entire Rockstar Energy Husqvarna Factory Racing team for all the support through the Supercross series,” Stewart commented. “I sprained my knee in an awkward crash at the St. Louis SX, but I managed to rehab it and ride through the pain well enough to make it through the remaining rounds feeling pretty good.

“I was really looking forward to returning to the MX nationals this summer, but some things out of my control happened in the Salt Lake City main event and in that crash I further injured my knee. This has forced me to sit out at least the first half of the season, but I will continue to work hard at the Baker’s Factory in the meantime to make a full recovery.”

With teammate Dean Wilson already sidelined, Rockstar Energy Husqvarna has Shane McElrath locked in for the opening rounds as a fill-in rider in 450MX, while RJ Hampshire, Stilez Robertson and Jalek Swoll are to remain in the 250MX category at this point.