'I came in slightly under-prepared and needed a little more time'. 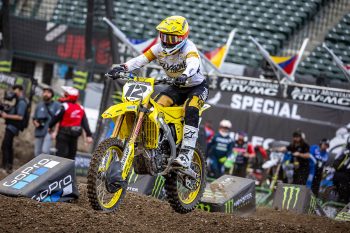 Twisted Tea Suzuki signing Shane McElrath will effectively reset following the disappointment of Anaheim 1, where a crash at the beginning of the last-chance qualifier ended his chances of making the main event following minimal preparation.

In his debut on the RM-Z450, McElrath just missed a 450SX transfer spot in heat two, finishing 10th and having to take to gate in the LCQ to fight for a position in the final.

A first-corner crash quickly ended the number 12’s night from there, but he was able to walk away without major injury and was left determined to improve in the upcoming rounds with more time on the bike. He conceded afterwards that he’d come into the season under-prepared.

“Well, it was a rough start to the season,” said McElrath. “I came in slightly under-prepared and needed a little more time. For me, I mentally didn’t show up ready to race and it took me too long throughout the day to get to that point.

“The team did the best they could for me, we all have a goal moving forward, and we are ready to work towards that. I’m a little banged up, but I’m going to get some rest this week, work on some things we can improve, and be better prepared next weekend.”

Prior to the 2023 season, McElrath rode for various outfits last year, beginning with the Rocky Mountain ATV/MC KTM team, before a knee injury kept him sidelined until the squad later folded. He then competed in the opening eight rounds of 450MX with Rockstar Energy Husqvarna as a fill-in, before landing another fill-in deal to complete the outdoors with ClubMX.

Following the conclusion of the AMA season, McElrath stepped back to a 250 to compete in the two-round World Supercross Championship (WSX), achieving SX2 title success with Rick Ware Racing. His 2023 deal with Twisted Tea then came together at the 11th-hour in place of Brandon Hartranft and his preparation was limited in the build-up to A1.

The 2023 Monster Energy Supercross Championship will continue on 21 January at Snapdragon Stadium in San Diego, with round two of the series at Oakland postponed until 18 February due to severe weather conditions affecting Northern California.