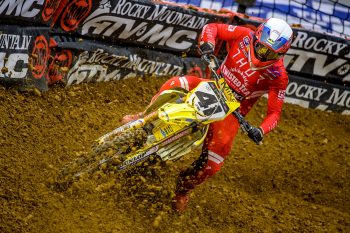 Twisted Tea HEP Suzuki’s Brandon Hartranft has begun his recovery after undergoing surgery on extensive spinal injuries that were sustained while preparing for the 2023 Monster Energy AMA Supercross Championship.

Hartranft fell while at the test track in Fresno, California, immediately transported to a nearby hospital, where he successfully underwent an operation on Wednesday morning to repair the severe damage to his spine.

According to the Road 2 Recovery (R2R) foundation, he is now in a stable condition with movement and feeling throughout his body. With the extensive list of fractures and damage sustained to his spine, Hartranft will have an extended stay in the hospital and a lengthy rehabilitation recovery ahead.

Associated medical bills are anticipated to be substantial – even after his insurance is applied – and, therefore, R2R has opened a fundraising campaign to assist with Hartranft’s medical bills. Visit www.road2recovery.com for details and to donate.

Hartranft was a standout in this year’s 450SX season, finishing eighth in the final championship standings with five top 10 results to his credit after completing all 17 rounds aboard the RM-Z450.