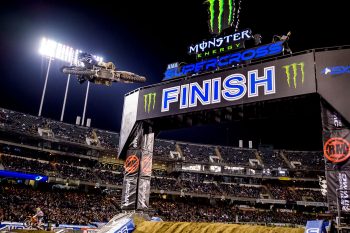 Oakland’s second round of the 2023 Monster Energy Supercross Championship has officially been postponed as a result of severe weather conditions affecting Northern California.

Supercross organizer Feld Motor Sports is working with RingCentral Coliseum to find an alternate date that works within the schedule.

“Due to the severe weather conditions afflicting Northern California, round two of the Monster Energy AMA Supercross Championship scheduled on Saturday, January 14 at RingCentral Coliseum in Oakland, California is being postponed,” a statement read. “The safety of our athletes, teams, operational and television staff and fans is always our foremost concern.

“Feld Motor Sports is currently working with RingCentral Coliseum to find an alternate date that works within the already announced 2023 Monster Energy AMA Supercross Championship schedule. Ticket purchasers can visit SupercrossLive for the most up to date information regarding this postponed event.”

The Supercross series will now continue with round three scheduled for next Saturday, 21 January, at Snapdragon Stadium in San Diego, California.