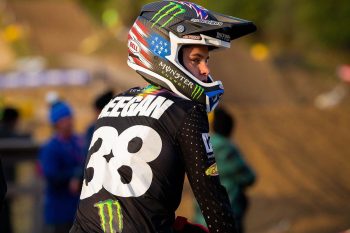 The second season of the Scouting Moto Combine commences this Friday at RedBud and MX Sports Pro Racing has announced its lineup of rider coaches and selected participants for the first round.

Broc Glover, Chad Reed, Jeff Stanton and Michael Byrne make up the coaching staff and combined, hold 10 Pro Motocross titles and 66 victories. Each of the 24 riders will be assigned one of the four former pros, separated into four groups.

With the opportunity to showcase their potential to key industry members, the event will feature a pair of 25-minute plus two lap motos, along with an educational, classroom-style session.

Additionally, prospects will receive key insights and advice on off-track elements that are associated with competing professionally.

In the inaugural season of the Scouting Moto Combine last year, Hymas and Ryder DiFrancesco traded wins throughout the events. DiFrancesco will make his long-awaited professional debut this weekend at RedBud in 250MX, with Monster Energy Pro Circuit Kawasaki.

The 2022 Scouting Moto Combine is expected to be held at three nationals this year, moving to Ironman on 26 August and Fox Raceway 2 on 2 September, following Friday’s opener at RedBud.