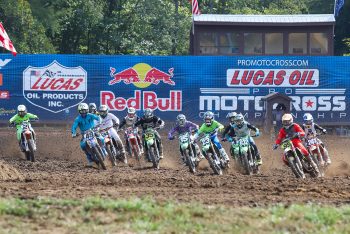 The Scouting Moto Combine program is set to return in 2022 to continue to facilitate the ongoing development of American motocross’ next generation of aspiring professional talent alongside Lucas Oil Pro Motocross.

2022 will once again be anchored by an all-star collection of coaches, which will feature the likes of former AMA national champions such as Broc Glover and some of the sport’s most highly-regarded competitors.

Coaches will mentor an assigned group of prospects through multiple facets of the combine, including a dedicated classroom-style session that addresses cornerstone elements of the sport – competition, media, fitness, and nutrition – as well as a pair of 25-minute-plus-two-lap motos on the same national track their professional counterparts will compete on.

Combine activities will be held on the eve of three nationals, beginning with RedBud on 1 July, Ironman on 26 August and Fox Raceway 2 on 2 September, and will feature a collection of the sport’s most high-profile amateur talent, developed in collaboration with each competing manufacturer – GasGas, Honda, Husqvarna, Kawasaki, KTM, Suzuki and Yamaha.

Each round will be broadcast in exclusive 30-minute highlights on MAVTV Motorsports Network and invited athletes will get to participate in a parade lap on Saturday alongside professional riders to kick-start each respective national.

With a potential group that consists of more than 50 A and B level amateur racers, a full list of invited prospects will be announced at a later date. It is expected Monster Energy Kawasaki Team Green’s Ryder DiFrancesco and Team Honda’s Chance Hymas  – who split Scouting Combine races at both Ironman and Fox Raceway last season – will return for 2022.