First-of-its-kind event gets kicked off with East region showdown. 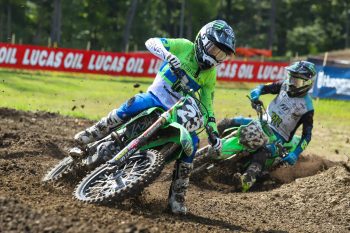 The first-of-its-kind Moto Combine took place the day before the Ironman National, kicking off a new era in the sport’s development of amateur standouts, with Ryder DiFrancesco and Chance Hymas splitting the moto wins.

The MX Sports Pro Racing Scouting Moto Combine saw a special collection of up-and-coming athletes gain insight into various aspects of the sport that included mentorship, media training, and racing on the track their professional counterparts were set to on the next day.

Hymas grabbed the win in the opening moto, only to be defeated by DiFrancesco in the tie-breaking second moto for the overall win. The duo carried incredible pace and showed perseverance as they each battled back from difficult throughout the day to go 1-2 for Team Green.

2009 Pro Motocross champion Chad Reed coached both DiFrancesco and Hymas through the experience and determined the event was a step in the right direction in providing a solid framework for up and coming talent to learn the ropes of being a professional in the sport.

“Hopefully [the Moto Combine] is a step towards making a difference,” said Reed. “I love motorcycle racing. It’s been a massive part of my life. My kids love it, and if they’re going to love it and this is something I’m going to have to do, then I’d like to see a positive thing for my kids to be involved in.

“If I can help steer the ship a little bit and give an opinion, then my hand is up. I’ve enjoyed it so far.”

Off the track, this group of elite amateur prospects received guidance on fitness and nutrition from prominent industry trainers Ryan Federow, Gareth Swanepoel, and John Wessling.

Support also came from combine partners U.S. Air Force Special Warfare via Sergeant Matt Marshall, who helped provide encouragement to the athletes on the life challenges that they’ll face on their journey to professional competition.

The Scouting Moto Combine will host its West Region gathering in just a matter of days, on Friday, September 3, as part of the Maxxis Fox Raceway II National, presented by Fox Racing.