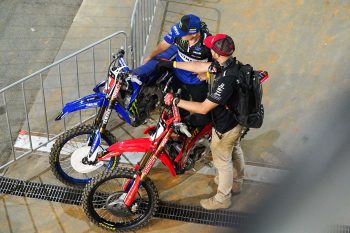 The plan is to globalise the sport of supercross and make it more accessible for any incoming stakeholders to be involved at a competitive level. A lucrative team ownership structure was revealed earlier in the year to help encourage investors and provide specific financial incentives.

Only 10 team licenses are available to owners within the series to span two each across the premier WSX (450cc) category, as well as the SX2 (250cc) class. With applications now closed and major decisions to be made as soon as within next month, Bailey outlined possibilities in our recent On-Record podcast.

Whether those owners would potentially be in-house factory organizations, existing privately-operated teams with factory support such as a Star Racing structure, or identities not already involved in the sport, the options are broad. And it’s understood that interest has met – and even exceeded – expectations since opening.

“It’s a combination of all three – it could be either of [those options],” Bailey explained. “I see someone like [Star Racing owner] Bobby Regan being the perfect beneficiary of this, because he is a successful businessman who is injecting a lot of his own money into racing currently and his team gets supported directly out of Japan.

“As for the factory teams, the factory-backed teams out of the US may not be as interested because they are funded purely out of the US, whereas if that funding comes from Japan, or head office in Europe then they will be really suited to them.

“So it’s varied, but in saying that, it doesn’t have to be a current team owner, we see a license holder as someone that could be a celebrity team owner. A great example is Michael Jordan purchasing a NASCAR team for 13 million dollars or something like that…

“Michael Jordan Motorsport does have a history in motorcycle racing, but that’s something we want to attract too – entrepreneurs and business people that see the value in this, ex-champion racers that want to be involved, combined with existing team owners that have been slogging it out for many years to see the potential in this to earn factory support.”

The initial 2022 ‘pilot’ FIM Supercross World Championship will be contested over five rounds, none of which will clash with Monster Energy Supercross or Lucas Oil Pro Motocross in the US. An actual schedule is yet to be formalised – at least in public – by SX Global.

However, when the series is due to expand in 2023, it’s certain that it will clash with American motocross and the MXGP World Championship, indicating that the WSX championship is aiming to attract teams and riders with the sole focus of competing in supercross year-round without the addition of outdoors.

“What we are wanting to do is create a World Supercross Championship and supercross becomes the main focus for riders and teams that want to do that,” Bailey confirmed. “It won’t be for everyone, there will be ones that want to focus on motocross and, in that case, MXGP could be better suited to them [as a world championship].”