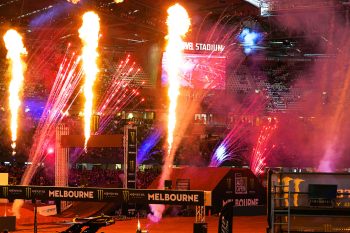 The involvement of Mubadala Capital brings an unprecedented level of financial support and resources to the international series, including a wealth of experience in funding the development of global business and sports ventures.

Mubadala Capital is the asset management arm of the Abu Dhabi government-owned Mubadala Investment Company – a sovereign investor with $243-billion in assets under management. It will prove instrumental in SX Global aiming to establish supercross events on a global scale.

A guaranteed $250,000 prize pool will be awarded per event, making it the richest series purse in the sport’s history, with only 10 team licenses available to independent owners. It’s unclear what calibre teams and riders will be involved, or whether organizers are primarily targeting those from the United States or Europe.

Each licensed team is expected to enter a pair of riders in the premier WSX (450cc) category, as well as the SX2 (250cc) class, plus two wildcard entries will be permitted per event in order to provide opportunities for local riders and sponsor-driven exemptions.

The 2022 season will span five rounds from September through November, introduced as a ‘pilot’ campaign before plans include expanding to a minimum of 10 rounds in 2023 and beyond. It’s understood that races being considered across multiple continents include locations in Europe, Asia, Oceania and the Americas, as well as the Middle East.

This year’s championship won’t clash with either Monster Energy Supercross or the Lucas Oil Pro Motocross Championship in the United States, however, from next year World Supercross will commence in June and overlap with the US outdoors. Notably, MXGP’s world championship schedule extends into September.

Incoming promoter SX Global has been quietly working in the background since earning the rights for at least the next decade, taking over from American promoter Feld Entertainment, which has opted to focus on operating a standalone AMA series following almost 20 years of holding the world championship rights in a combined effort with the FIM.

“There is a massive fanbase and untapped demand for supercross outside the United States and, backed by the financial support and significant resource of Mubadala Capital, we intend to feed that, bringing the sport to new regions through the most exciting and lucrative world championship series in the history of the sport,” commented Tony Cochrane, president of SX Global.

Cochrane spearheaded the development and success of V8 Supercars, an Australian-based auto racing series that became one of Australia’s most successful motorsports, eventually expanding with events in Shanghai, the United States, Bahrain, Abu Dhabi and New Zealand.

In addition, proven supercross event promoters Adam Bailey and Ryan Sanderson have been the driving force behind Australia’s highest-profile offering, the AUS-X Open. The duo has promoted five years of consecutive sold out AUS-X Open events in Sydney (2015-2018) and Melbourne (2019), along with successful FIM Oceania events in Auckland, New Zealand, during 2018 and 2019.

“Our entire careers have been driven by a passion for motorsport and entertainment, and our motivations are as pure as they come – to continue to evolve and elevate our sport and its incredible athletes to new levels of global relevance and success,” stated Sanderson, managing director, commercial, for SX Global. “Our aim is to take the amazing sport of supercross global and reveal its greatness to millions of new fans all over the world.”

Representing Mubadala Capital on the SX Global board of directors will be Matt Kim and Russ Pillar, who collectively bring decades of experience backing and leading global sports, media and entertainment companies.

“Our commitment to SX Global and the FIM Supercross World Championship builds on our strategy and track record of selectively investing in premier content properties with strong global appeal,” said Adib Martin Mattar, head of private equity at Mubadala Capital.

“We expect that our investment in SX Global will introduce the exciting sport of professional supercross to a global audience and build lasting value by delivering an authentic, exciting and fan-centric experience.”

The plan is to deliver an elevated experience for fans through unique race formats, broadcast innovations and in-stadium attractions that elevate the overall entertainment experience. Broadcasts could include live onboard cameras, plus potential radio communications between riders and teams to appeal to viewers at home, while the stadium experience will be created to captivate fans on location.

While the AMA Supercross series in the US currently operated by Feld Motor Sports has firmly established itself as the preeminent platform for the sport, there has yet to be a definitive global series to lay claim to a true FIM-sanctioned world championship.

Highly-successful events are held throughout Europe and Australia in the latter stages of every year, however, these events are not currently linked by any official FIM championship status and remain a significant untapped opportunity for the sport’s ongoing credibility and evolution. It’s also a significant opportunity for riders and teams to expand their influence and financial prospects.

“Over the years, there have been various attempts to build a true world championship series for supercross, but none of them have succeeded due to deficiencies in funding and resource, lack of global and regional relationships and a variety of other factors,” explained Bailey. “Our team possess the necessary supercross and international event background, relationships and expertise, and the funding to make this world championship a reality.”