‘Why supercross should be a global sport’ – SX Global 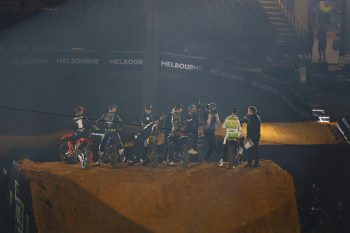 Following the announcement of a new FIM Supercross World Championship for 2022 and beyond, incoming promoter SX Global is confident that a large untapped fanbase is a key reason in ‘why supercross should be a global sport’.

The revelation of SX Global’s involvement in WSX came earlier this year, selected by the FIM in a decade-long commitment that will see a five-round pilot series in 2022, with at least 10 events expected from 2023.

SX Global managing director, motorsport, Adam Bailey has successfully led high-profile supercross events including the AUS-X Open in Australia and now looks ahead to a wide range of opportunities for growth associated with making supercross a truly international sport at its pinnacle.

“First of all, why we think that it is a great opportunity for the sport and why supercross is an amazing sport in itself, is because its the one motorsport we can put in a stadium, in a capital city somewhere that is nowhere near a motocross track or a grand prix track,” Bailey told MotoOnline.

“A Formula 1 street circuit even requires a huge multi, multi-millionaire dollar investment for infrastructure and circuit builds and stuff like that, whereas we can be in and out of a stadium in five days or less, and bring a whole show into a capital city in front of 50,000 people that may never have been interested before.

“That’s the opportunity for supercross and why we think it should be a global sport, because we can access new fans so much easier than other motorsport categories.”

While current teams aren’t required to ‘fly-away’ overseas in Monster Energy AMA Supercross, which enables a significant number of resources on-hand, one-off international events have demonstrated that competitors and teams utilising a fly-in approach can be competitive.

“Regarding fly-aways, that is another reason why we think this model can work, because the whole thing can be a lot more nimble than probably as what has been seen before,” Bailey added. “The AUS-X Open is a perfect example – the winner of that has turned up with their bike and parts in a box every year.”

The schedule for this year’s FIM Supercross World Championship has not been confirmed and isn’t expected to be released in full until at least May, however, it is almost certain that there will be a round to be contested in Australia as a replacement for the now defunct AUS-X Open.