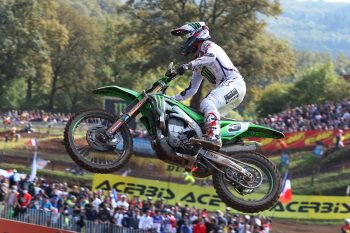 Febvre – runner-up in last year’s MXGP World Championship – fell heavily at the Paris Supercross during the off-season and underwent surgery on a double fracture of the tibia and fibula.

It was announced Febvre would miss the opening rounds of the 2022 world championship, targeting a return at round three before the latest update revealed the Frenchman will be sidelined for an indefinite period to ensure optimal recovery.

“I was able to go cycling, swimming and working at the gym twice a day, but I still felt some pain in my leg and had several medical examinations to understand where the problem lay,” explained Febvre.

“Finally, I underwent minor surgery to remove some screws that were causing irritation and after this intervention, in Luxemburg, my surgeon made another scan and discovered that the bone was not healing perfectly.

“It’s frustrating of course but there is no other option than to have further surgery next week – they will open my leg, clean the bones and make a bone graft by taking some bone from my hip.

“I already told my surgeon that if it’s necessary to put some plate or whatever I want to do it to ensure an optimal recovery. Nobody can tell how long it will take to recover, but for sure when they will open my leg they will be able to give me more details.

“My goal remains the same, to work hard and to return to racing as soon as possible. The team has been strongly behind me since the beginning and I can’t wait to join them at the race track.”