Kawasaki contender will attempt to ride in two weeks. 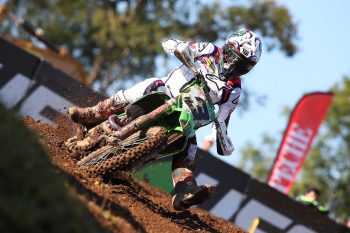 Providing an update on the injuries sustained in a heavy fall at the Paris Supercross late last year, Kawasaki Racing Team’s MXGP title hopeful Romain Febvre is targeting a return at Argentina’s round three, effectively ruling himself out of the opening two rounds.

Febvre underwent surgery on a double fracture of the tibia and fibula in his right leg, the operation a success, however, the Frenchman feels he is not yet ready to jump back on a motorcycle competitively.

“I crashed in Paris and I broke my tibia and fibula, fibula only on one place but the tibia was broken on many places,” Febvre explained. “Bad injury, all get fixed pretty good by a good doctor there. I still have to wait, I don’t exactly know how long, the plan is to start in Argentina.

“Yesterday I had a check with the doctor, and actually, the doctor allowed me to try to ride at that point. I still feel I cannot go on the bike. I can probably ride slowly on a flat track, but this is not really the goal. I will wait I think two more weeks and then jump on the bike.”

The opening round of the 2022 MXGP series takes place at Matterley Basin on 20 February, followed by the MXGP of Lombardia on 6 March. Missing both events puts Febvre at a possible 100 point deficit if he returns at Villa La Angostura for round three, a crushing blow to his title aspirations.

Slight consolation for last year’s runner up is that Jeffrey Herlings is also currently injured, ‘The Bullet’ recovering from a surgery on left his foot, a return date not yet announced for the reigning champion.