Operation successful as Frenchman vows to 'be back stronger'. 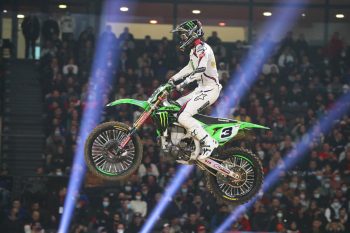 Monster Energy Kawasaki rider Romain Febvre has undergone successful surgery on a double fracture of the tibia and fibula in his right leg sustained at the Paris Supercross, now on the road to recovery.

Febvre finished fifth in the first of the event’s three sprint races and then made a great start in the second outing to hold second position before ejecting mid-air in a heavy fall.

This year’s MXGP runner-up has just over two and a half months to recover before the 2022 season begins and remains positive about the situation, planning to use the upcoming weeks to rest before starting preparation for next year.

“Not the way I wanted to finish the season for sure!” Febvre explained. “I was happy with my riding, didn’t take any risks, and I felt more and more comfortable with the track when I had this crash. In my career I already recover from injuries – I know what that means and for sure I will be back stronger.”

Febvre has had a standout season this year, taking the world championship down to the wire alongside eventual champion Jeffrey Herlings (Red Bull KTM) and then starring in the tamed-down Paris Supercross prior to crashing out of contention over the weekend.