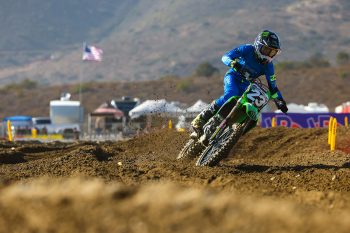 Monster Energy Kawasaki Team Green rising star Ryder DiFrancesco again found himself atop the podium in the newly-formed Scouting Moto Combine, this time in the West Region at Fox Raceway.

After trading wins with his teammate Chance Hymas in the inaugural running of the event at Ironman just a week earlier, DiFrancesco won again ahead of the penultimate round of the 2021 Lucas Oil Pro Motocross Championship.

This coast offered up a few different coaching options, while Chad Reed remained as a mentor alongside Broc Glover, MX Sports brought out Buddy Antunez in place of Damon Bradshaw.

Hymas would manage to draw first blood, winning the opening moto just as he did at Ironman, but DiFrancesco was not to be denied in the end, taking the second moto win and the overall.

“To come away with first overall from both of the combine events feels awesome,” DiFrancesco said. “My motos went really well today and I dealt with the challenge of leading all but one lap of the two long races. That was a lot to manage, so I’m stoked I was able to get it done.

“This has been a huge step towards the future in racing for all of us. I know this preview of racing a pro motocross event will be a big help for me in the future and I look forward to attending these combines again next year.”

Behind them, a host of fast talent turned up to challenge, with Honda-supported rider Hunter Yoder eventually taking the final spot on the podium on the day with 5-3 moto finishes.

Preston Boespflug had an impressive opening moto with a third-place finish, but a 15th in moto two dragged down his overall score. Third place finisher from the east coast event Daxton Bennick (Red Bull KTM) managed 7-9 on the day to take home ninth overall.