Seasoned 250SX contender to use break to improve feeling. 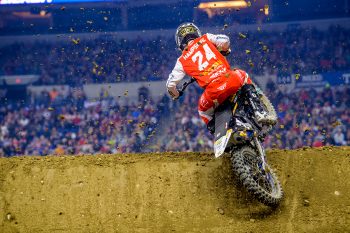 Amidst ‘another night of survival’ at Indianapolis, RJ Hampshire scored his first podium of the year in 250SX East, admitting afterwards that he is still having trouble with the latest Husqvarna platform.

In the build-up to the Minneapolis opener, Hampshire was vocal that he struggled from the outset with the new generation FC 250, finding a step in the right direction in California before the season commenced.

A top-five at US Bank Stadium was a decent start for the number 24, before he crashed out from podium contention at Arlington in the second race of the Triple Crown. Detriot and Indy have since seen Hampshire consistently in the top five – fourth and third – but still missing pace to challenge for the victory.

“It was another night of survival,” Hampshire recalled. “That main event was ugly again… honestly, we were just trying to get out of here with a podium.

“I had another weekend not really trusting the bike or knowing what it was going to do. We’ve been changing a lot and trying to find something, just to give me some comfort back.

“You can tell I’m not all there yet, not trusting it. With these two guys [Jett Lawrence and Cameron McAdoo] through the whoops, that’s all confidence and trust, knowing what it’s going to do.

“Right now, I’m not there, which is good that we have this little break now. We made some progress last week with it, I just haven’t had enough time on it – today was the first time on it.”

Hampshire sits P4 in the 250SX East point-standings as the western region resumes in Seattle this Saturday. Following a weekend off, east coast riders will return in Atlanta on 17 April for the first 250SX Showdown of the year.