Hampshire cleared to ride ahead of Daytona 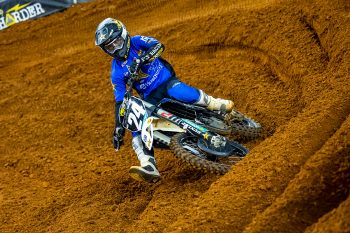 A heavy fall during the second 250SX East race at Arlington saw RJ Hampshire forced to the sidelines, the Rockstar Energy Husqvarna rider since confirming that he has been cleared to ride ahead of this Saturday’s Daytona Supercross.

Hampshire was looking to be a podium threat during the Triple Crown, charging to third in the first race before hitting the back wheel of Phil Nicoletti mid-air with two laps to go in race two, landing hard to be assisted away.

While he’s yet to be 100 percent confirmed for Daytona, the ever-gritty Hampshire has indicated that he turned a share of laps on Monday and will be aiming to race-on come the unique speedway-based event in Florida this weekend.

“This sport can be brutal at times,” Hampshire explained after undergoing the series concussion protocols. “Bummed to end my night early in Dallas… I must have misjudged where Phil was off the jump and before I knew it I was into his back wheel mid-air.

“I’m not gonna dwell on it. We pick ourself up and move on. Luckily I’m feeling good and got cleared by the docs on Saturday, did a few laps today and will continue to do all I can to be my best at Daytona this weekend.”

The number 24 started his season off with a credible fifth in Minneapolis after making late progress with the new FC 250 Rockstar Edition in the pre-season, now 10th in the championship standings after being credited 16th overall at AT&T Stadium.