'The Bullet' determined to be ready to race as soon as possible. 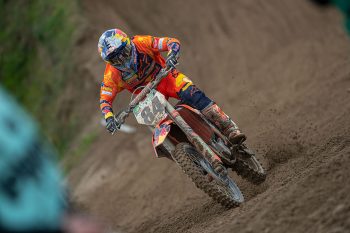 Herlings was spending time in Spain for pre-season preparation ahead of his MXGP title defence, winning the opening round of the Spanish national championship before the incident occurred the following day.

‘The Bullet’ was reportedly unseated on a small and routine jump section of the former grand prix site RedSand MX complex near Castellon, ultimately causing the crash with complications.

“We’re paying the price for a ‘nothing’ crash,” Herlings explained.  “I think I might have hit a small stone on the take-off and that put me over the bars.

“The impact was pretty big on my left foot and we needed to get it fixed the best we could. Big thanks to the medical staff for looking after me and getting my foot repaired, again! Also to the whole Red Bull KTM team, we’d worked hard for this 2022 season and the goal now is to be back and winning as soon as we can.”

The Dutchman underwent surgery in Belgium under the knife of Dr Stefaan Verfaillie who had previously operated on him, and more information is expected to released in the coming weeks as to when he will be back on the bike and ready to race.

Herling’s isn’t the only MXGP title contender to be injured during the off-season, 2021 runner-up Romain Febvre recovering from right leg surgery on a double fracture of his tibia and fibula sustained at last year’s Paris Supercross.