Craig ‘not extremely pumped’ after promotion to A1 podium 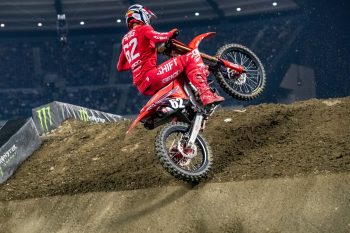 Christian Craig admits he’s ‘not extremely pumped’ with his podium at Anaheim 1’s opening round of Monster Energy Supercross, where he was promoted to third following a post-race penalty handed to Austin Forkner (Monster Energy Pro Circuit Kawasaki).

The Geico Honda rider was thankful to be lining up at A1 after recently having his WADA sanction lifted ahead of the season commencing, allowing to contest the full 250SX West championship.

It was a stellar night for Craig, who qualified third and transferred directly to the main with a P2 result. He rode strongly in the 17-lap affair, crossing the line in fourth before being bumped to third hours after the race – denying him the opportunity to stand on the podium.

While satisfied with his performance and the overall result, the California native is determined to land on the box rightfully.

“Anaheim was awesome honestly,” Craig stated. “I went into the weekend just grateful to be there so to leave with a third is so cool. For months I’ve been riding supercross but had no idea when I’d be racing – I assumed it would be in April, when my suspension was supposed to end originally.

“The trip I took to Switzerland in December thankfully went my way and I was able to race A1. All day on Saturday I felt good. I qualified third overall and got second in my heat. The main was going pretty good for my first race back. I started around third and stayed there for a lot of the race.

“Dylan [Ferrandis] got by me eventually and then I road pretty tight, keeping me in fourth. [Austin] Forkner, who was in front of me, ended up having a crash and re-entered the track at the wrong place. I was not far behind him, so I really do think we were in for a good battle had he entered back where he was supposed to, but we have the rest of the season to do that.

“Saturday night I got the call that I would be bumped up to third for his mistake. I’m not extremely pumped on it because I want to finish in third and actually stand on the podium, but we will get there. Really looking forward to the rest of the year!”

The Monster Energy Supercross series visits St. Louis in Missouri this Saturday night for round two of the 17-stop championship