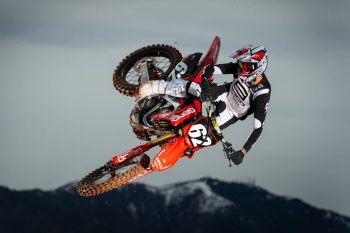 Geico Honda’s Christian Craig has had his World Anti-Doping Code suspension lifted following a successful appeal with the Court of Arbitration for Sport.

Craig allegedly tested positive for a banned substance at the Daytona supercross in 2018, however was only notified of the violation in January 2019. It only became public in June when he addressed the allegations.

The 250SX contender has always believed a supplement he consumed was contaminated with the substance Heptaminol, and the low-level categorisation of the substance allowed him to continue racing until a two-year sanction was handed down in July, dated back to 10 March 2018.

Craig has continued to pursue his innocence and challenged the WADA suspension, recently meeting with the Court of Arbitration for Sport in Swtizerland where a settlement was reached, lifting his ban on 31 December – which was initially set to conclude on 9 March 2020 – and ultimately allowing him to contest the full 2020 Monster Energy AMA Supercross Championship.

“I could not be happier to announce I was able to accomplish what I had hoped at the Court of Arbitration for Sport in Switzerland,” Craig said in a statement. “My suspension will now be lifted on 31 December, which is a win I can’t even describe.

“[I’m] pretty speechless and incredibly grateful for the people around me, the industry and my fans for keeping my spirits up this year – it truly has been the roughest year on me and I’m just so happy it’s finally over.

“I knew if I threw in the towel like they hoped I would, I could not feel at peace knowing what could have been. This was the final chance and it was so worth it. Thank you all so much, this feeling is surreal.”

Geico Honda has continued to back Craig throughout the entire process, while the number 62 has prepared for 2020 as usual despite the former sanction being in place.