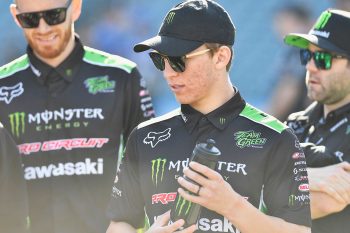 The podium result of Monster Energy Pro Circuit Kawasaki’s Austin Forkner has been removed a number of hours following the 2020 Monster Energy AMA Supercross opening round at Angel Stadium.

An error while leading saw Forkner caught in an awkward position mid-rhythm section and he cut a portion of the track as a result, losing positions to Yamaha duo Justin Cooper and Dylan Ferrandis in the process.

While detailed information is yet to be released, the 250SX West main event results were delayed and, once published, confirmed that Forkner had been docked two places from third to fifth. Prior to his penalty, Forkner explained the incident.

“I kind of got Dylan back, so I waited and went then tucked in behind him. That was that. I slowed up, but in those situations it’s hard to know the right thing to do.

“I knew that I missed… I was already pissed that I gave up the lead and then second, so I was like okay, get back on the track and get back into the race. It was just a quick decision that I thought I’d made the right decision.”

As a result of Forkner’s penalty handed out, Geico Honda rider Christian Craig was promoted to a podium result in third, with Michael Mosiman (Rockstar Energy Husqvarna) also improving by one place to fourth.