‘It was good to see what it takes to win’ – Webb 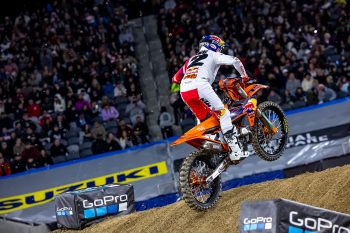 Webb felt he was in a strong position after he equalled his best result in 12 months with P2 at Anaheim’s opener, with extensive changes in the build-up to the 2023 season providing an improved feeling on the 450 SX-F.

The general consensus was that Webb was in a better place than last year, despite also finishing second at A1 to open the 2022 Monster Energy Supercross Championship and the outing at San Diego confirmed this as it was the closest he has been to a main event victory since Salt Lake City nearly two years ago.

“They were both [A1 and San Diego] good, but tonight was good,” Webb explained. “Like you said, I got off the start, which is really key, especially tonight with the way the track developed and was able to lead some laps, which was cool.

“I felt like he [Tomac] had some really good spots at the beginning, one of them being that triple all of the way to the dragon, the whoops to the finish and I felt like I was really good on the tight stuff. I felt like early he was opening everything up and really railing stuff nice, so once I kind of latched onto that it seemed to help a lot.

“As it got rougher, the tight lines I was doing seemed to get better, so yeah, he was just on to that at the beginning for sure, and I think that is really the first time in a long time that I have been able to ride behind him like that, in a whole main event. It was good to see what it takes to win and learn from a few mistakes and keep battling along.”

With Tomac (Monster Energy Yamaha Star Racing) and Webb (Red Bull KTM Factory Racing) going 1-2 at each of the two rounds contested so far, the gap between the pair is six points entering Anaheim 2 this Saturday.