Resurgent Webb ‘in a good, raceable spot’ after A1 podium 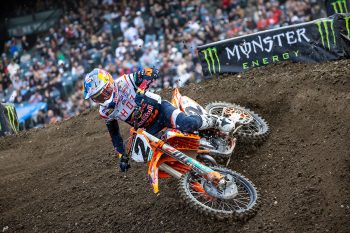 A resurgent Cooper Webb said he is ‘in a good, raceable spot’ after a spirited charge saw him storm to P2 in Anaheim 1’s Monster Energy Supercross opener. It was a result that equalled the Red Bull KTM rider’s strongest over the past 12 months.

“The start was not good… me and Malcolm [Stewart] kind of got into it and then I wasn’t too bad,” Webb recalled. “I was right behind Chase [Sexton] and I actually stalled it, so that kind of put me back. I just put my head down, I saw up front it was a freight train and fortunately no one was really getting away too much, so we were all pretty fast. Especially at the beginning, we were all riding well and made a few passes.

“I mean it is tough, because A1, everyone’s feisty and wants to T-bone and we are all excited, so it was just being smart, getting around guys but moving forward, not wasting too much time but not being stupid.

“At the end, I just felt really good, the track was insanely rough and I found some good lines. Me and Dylan [Ferrandis] were kind of coming through, then got around him, got around Kenny [Ken Roczen] and just saw Chase and was able to make a pass there late. I was stoked.

“I was really hoping, honestly, to get a top-five or a podium probably about halfway, and then like Eli said, I just started clicking away and guys made mistakes and worked out. But yeah like I said it really is really good to be up here. I mean it has been a long year since I was here last year, but after that, it went downhill.

“I feel good, like I said I feel really, really good on the bike, I feel strong and I feel like we are in a good, raceable spot. I’m excited to see where this season takes us.”

Despite Webb also finishing second at A1 last season before his championship challenge declined, the result at the 2023 opener is a promising sign for the two-time 450SX champion, who was adamant that he and Red Bull KTM have made progress in the off-season and later revealed that almost everything was changed on his 450 SX-F ahead of the season.

“Engine, chassis, suspension, triple clamps, pretty much everything in the engine, transmission, footpegs, every piece on that motorcycle [has been changed],” Webb added. “For me, turning is my go-to and tonight I could turn on a dime, which is incredible. You always ride your practice tracks and you hope that’s what it aligns to, but you never know.

“I felt super-good in the whoops, jumping or skimming all day. [We’re all] going to have good tracks and bad tracks, but overall I’m pretty happy. I think I changed one click today which is unbelievable for me, so I will take that and I’m sure we will improve little, by little once we kind of get in the flow of things. I think we are in a really good spot.”