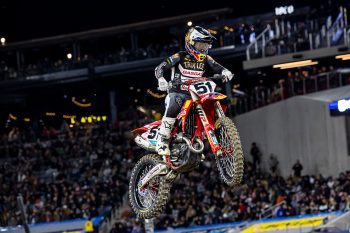 Following the heat race clash with Jason Anderson and subsequent tweet from the Monster Energy Kawasaki rider, Justin Barcia has moved to respond to that incident post-race at San Diego.

In the closing stages of 450SX heat one at SnapDragon Stadium, Anderson made a move up the inside of Barcia in a 180 turn, taking out the TLD Red Bull GasGas rider’s front wheel which brought the number 51 down.

After the outing, a tweet from Anderson regarding the incident read: “Lol, Barcia complaining about my move… neither of us have room to talk. But especially him. That b***h can give it, but cries and can’t take it.”

Anderson and Barcia finished second and third respectively in the heat, with the MC 450F rider later going on to finish P3 in the main event, notably making a move on Chase Sexton that brought the Team Honda HRC rider down at the same corner Anderson caused him to fall earlier in the night. Anderson completed the main event in seventh, remounting from a crash during the bout.

“I mean I’m not surprised, I didn’t complain at all,” Barcia stated after the main event. “He called me over and started calling me all kinds of profanity and I was just like, alright. Then the AMA came over to the track and asked what happened, and I said he was just called me over and was yeah, cussing me out.

“I’m like alright and then yeah it was so it was random he’s like, I don’t know, I didn’t say anything so I don’t know, it’s just solid. But no, I’m not going to get into a Twitter fight and yeah, it’s silly honestly. I didn’t have a problem with the pass, like I said, me and Chase, the same pass happened with us and obviously I didn’t want that to happen, maybe I think Jason obviously wanted that to happen [in the heat race].

“Like I said, no big deal, no hard feelings. If he wants to curse at me that’s fine, I can handle it, I have pretty thick skin I feel like. But yeah, move on from it and let’s go racing, it’s a long season and yeah, I don’t feel like I need to pay him back or anything but I race hard, so let’s go.

Third in San Diego was ultimately a positive result for Barcia after multiple crashes during A1’s opener denied him a result at Angel Stadium. Barcia’s charge for 2023 has been bolstered by an all-new MC 450F, the platform essentially bringing GasGas in line with the latest model KTM and Husqvarnas.

“For me, the new bike has been great,” Barcia added. “It is very easy to make small changes and adapt to the tracks. I did a big few weeks in California testing on it, then went to Florida for a month and just rode the bike, felt really comfortable with it.

“Came to California, rode it again and was right on pace at the test track, so that was good. Anaheim, that was a weird one, just a tricky track and was kind of off all day a little bit, just weird. Then the main event, getting the holeshot, getting to lead and struggled a little bit, then obviously a couple of mistakes that took me out of that.

“So it was a bummer to miss round two with the weather, but it’s good to come back here at Snapdragon Stadium and have a good result. There was a lot of pressure tonight, just the battle in the race was intense, so it was good to come through that. But definitely, the new bike is awesome and it is a contract year for me so definitely want to have a good season.”