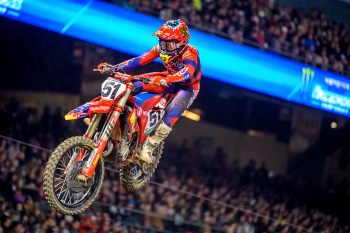 It was a case of what could have been for TLD Red Bull GasGas rider Justin Barcia at Anaheim 1, with multiple crashes denying him a result after leading in the early stages of the 2023 Monster Energy Supercross opener.

The two-time A1 winner swiftly made his way to the front of the pack, which he headed until lap four when he passed by eventual race-winner Eli Tomac (Monster Energy Yamaha Star Racing).

Making a costly mistake, Barcia dropped outside of the top 10 following an error in a rhythm section and was recovering ground lost before another fall later in the race saw him ultimately finish P11 on debut aboard the new GasGas MC 450F Factory Edition.

“The day started off pretty well,” he reflected. “I felt good in the first practice, but I struggled a little bit in the next two, just with feeling comfortable with the track, because it was very tricky with a lot of square edges and things like that. I made a big change before the heat race and unfortunately went in the wrong direction.

“I went back to my base setting for the main event. Pretty much ripped the holeshot, led a few laps, made a huge mistake, and had a crash. I worked my way back up to like seventh and had another crash, so it was a difficult main event. We’ll take a few positives from the day.

“We had a good start and we had speed – we just need to keep it on two wheels and keep it simple and we’ll be good, but the speed is there, the fitness is there and the bike’s there, so I’m happy with that and definitely put this result behind us and move forward.”

Barcia – who is renowned for starting the Supercross season strong –  will have an opportunity for redemption this Saturday when Monster Energy Supercross resumes at Oakland.