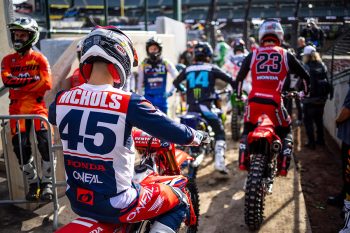 Vice president of Supercross Dave Prater has moved to detail Feld Motor Sports’ decision to postpone Oakland’s scheduled second round of the 2023 season.

It was announced on Wednesday that the event originally scheduled for this Saturday would be pushed back to a later date as a result of severe weather conditions affecting Northern California.

“I know everyone has seen the news, seen the weather in California on the west coast, they have had unprecedented rainfall over the last several weeks, especially in the bay area up in Oakland and San Fran,” Prater explained. “We’ve been extremely optimistic and we moved in… things were going well, the base was solid, the track was going in and we got the outside lanes built.

“Then just Tuesday all day, then overnight Tuesday night with the amount of rain that we got in Oakland, we just felt it was best that we postponed the event to make sure its as safe as it can be for everyone involved – fans, race teams, athletes, our staff, stadium staff, really everyone involved. It was a tough decision, those things you know you hate to pull the plug on a date, but it was the right thing to do.”

Within hours, a rescheduled date had been announced with the round at RingCentral Coliseum to now take place on Saturday, 18 February – originally slated as off weekend for the series after Tampa.

“The team here has been doing a fantastic job, so we’ve been on the phone with the coliseum and they were in contact with the A’s, just making sure that we could adjust the date quickly. We are extremely excited that we were able to move that quickly and that Oakland was able to give us that date to make up this round.”