Frenchman in podium contention as season commenced at A1. 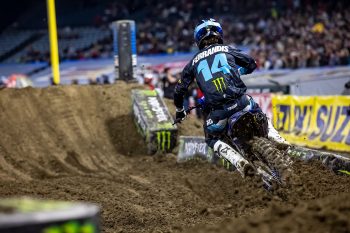 Frenchman Dylan Ferrandis was elated ‘to be back in the mix and back to fighting’ in 450SX podium contention following Anaheim 1, ultimately riding to fourth position as the gates dropped on Monster Energy Supercross 2023.

After qualifying sixth at A1, the number 14 completed his heat race second behind Monster Energy Yamaha Star Racing teammate Eli Tomac and finished less than two seconds shy of the podium in the main, taking the checkered flag in P4 and labelling it his best opener yet.

“It was a good day,” recalled Ferrandis, who has immediately taken a liking to the new generation YZ450F. “Honestly, it was the best opening round for me in the 450 class. I had a chance to be on the box tonight. I was third at some point in the main event, but a small mistake cost me the podium.

“In the end, I finished fourth and was right on the wheel of the third guy, so it’s a good result, and I’m really happy with that first race. Honestly, after two very bad seasons in Supercross, it’s good to be back in the mix and back to fighting for podiums.

“I know what I’m capable of and, I think tonight, I didn’t race to my full potential. I know I have a small margin to improve and I’m ready for next week. The new bike is just so much better for me in Supercross – I think we proved it tonight with Eli. He won and I finished fourth, so it’s a good start to the season for us.”

Ferrandis won the 450MX title on debut two years ago and was tipped for a strong second season of Supercross in the premier class last year, but his campaign was brought to a premature end after withdrawing from round 10 with a wrist injury.

Further heartbreak followed when a thumb injury forced him out of his Pro Motocross title defence before the series commenced. Making a return late in the championship, Ferrandis was sidelined again ahead of the Ironman national following contact with Justin Barcia that resulted in lower back pain.

Despite his troubled year, Ferrandis was able to end it on a positive as part of Team France’s second-placed effort in the Motocross of Nations (MXoN) at RedBud.