'I’ve definitely been very difficult this off-season with the team'. 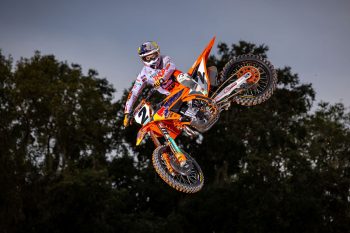 Two-time 450SX champion Cooper Webb is in a position to try and regain the Monster Energy Supercross title in 2023. That’s his general feeling heading into the new season today at Anaheim.

The 27-year-old won his first premier class crown on debut with KTM in 2019 and repeated in 2021, however, didn’t win a single race in his defense last season.

Reunited with Aldon Baker and spending a full season training at the Baker’s Factory, Webb – on a single-year contract with KTM – is certain that the rights steps have been implemented in order to contest from the title once again onboard the new generation .

“We’ve made a lot of progress,” explained Webb. “I’ve definitely been very difficult this off-season with the team, made it very clear that we needed to change a lot and kind of started this summer, we got to early, went back to basics and stepped back to a standard and went from there.

That’s been good and, like I said, I know what I felt in 2021, what it takes to win and where a bike needs to be, and I feel like we got there in this last month. I’m really excited, ready to get to it and being back with Aldon’s been really good with the new group, getting back to getting in really good shape has been nice.

“That’s where I’m at… I feel like I kinda retired last year, took a year off, and it was much needed – especially this summer, the time off to regroup. Now I’m back just to try and win, that’s the only reason we’re really racing, so I feel like I’m back at that point.”

Webb’s season started in promising fashion one year ago with a runner-up result at Anaheim 1 and he claimed three additional podiums in the season on his way to seventh in points without winning a main event. Following that, he sat out the Pro Motocross season altogether.