World champion Vialle admits ‘a lot to learn’ in supercross

Frenchman motivated for the challenge that lies ahead in 2023. 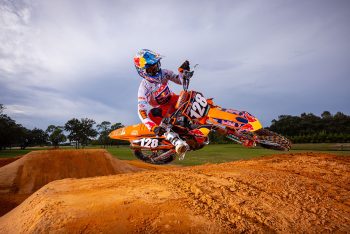 Reigning MX2 world champion Tom Vialle has admitted he has ‘a lot to learn’ in supercross following his transfer to the US with Red Bull KTM Factory Racing, gearing up to compete in his rookie 250SX East campaign.

For 2023, double world champion Vialle put a step to the premier MXGP category in Europe on hold to pursue a career ambition of racing in America.

Having never raced Monster Energy AMA Supercross, the Frenchman faces a steep transition after multiple seasons of focusing on outdoors in the grand prix paddock, but is motivated by the challenge and has been enjoying preparation at The Baker’s Factory.

“For me, it’s a new life,” said Vialle. “After winning the 2022 MX2 World Championship, I moved to the US and it was a tough decision, but so far everything has been so good. I’m training in Florida with Aldon and the group at The Baker’s Factory and everything so far, so good. I like it a lot.

“I enjoy riding supercross, it’s a new discipline for me, so I have a lot to learn. I’m doing a good job training with the team and mechanic – everyone is really nice to me, so we’ve really moved forward. I’ve never raced a supercross here in the US, so I’m really excited about it.

“Just to go there and see what it’s going to be like to ride at night in the stadium and to ride in front of so many fans is going to be a big thing for me. And then I will move to motocross in the summer, I am also excited for that.

“That will be a new challenge for me – a little bit closer to what I’ve been training for the last four years in Europe – but I’m really excited about racing both SX and MX for the first time in the US. For me, a lot of new things are coming and I can’t wait to start racing.”

Pro Motocross then gets underway on 27 May at Fox Raceway, before the newly-introduced SuperMotocross World Championship play-offs begin on 9 September.