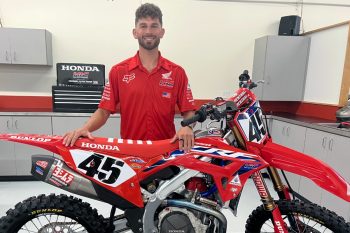 As Team Honda HRC’s newest signing, Colt Nichols will officially step up to the 450SX class for the 2023 Monster Energy Supercross season as the effective replacement of Ken Roczen.

The premier class debut for the 28-year-old Oklahoma native will arrive a decade into his pro career and follows his successful period with Monster Energy Star Racing Yamaha.

Competing in the west regional class instead of defending his 2021 250SX East regional title, Nichols crashed heavily in the earliest moments of the 2022 season at the Anaheim opener. Leading his heat race, Nichols broke both arms and sustained burns when his Yamaha came to a rest on top of him.

Nichols announced the end of his time with the Star team during the summer, no longer eligible for the 250 category and without a clear path to a 450 ride after an initial deal to ride KTMs fell through. He had intended to ride with Rick Ware Racing in the World Supercross Championship (WSX), but opted out when the HRC deal emerged.

“First and foremost, I’m just thankful and blessed for this opportunity to come about,” Nichols explained. “It seemed like a long shot at first and, now for it to actually be real, I couldn’t be happier to be joining such a prestigious team and be on a factory Honda.

“I’ve always wanted to ride for this team, and they carry a very large and awesome legacy. I hope I can contribute to that, get some good results and help the team in any way I can. Moving to the 450 class and racing the best guys in the world will be fun and very challenging, but I’ve got a great teammate to learn from.”

“We’re very happy to welcome Colt to Team Honda HRC,” said Brandon Wilson, manager of sports and experiential at American Honda. “During our selection process, not a single person had a bad word to say about him – he’s an incredibly talented rider and also just a nice person that we know will be a great fit in the team.

“All of our current riders like Colt and liked the direction. With Colt being good friends with our official test rider Trey Canard, we think there will be a positive energy with everyone, which will lead to great results for the team. We’re happy to give him the 450 opportunity he deserves and we’re all looking forward to A1.”

Winner of four 250SX main events, Nichols will debut on the 450 at Angel Stadium on 7 January, before looking ahead to the remaining Supercross rounds in his first attempt at the full 17-race calendar.