‘Everyone is going to benefit from SMX down the road’ – Carmichael 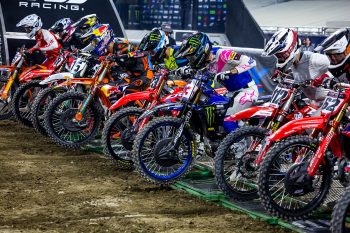 Supercross and Pro Motocross legend Ricky Carmichael is confident that ‘everyone is going to benefit from SMX down the road’ following this week’s official SuperMotocross World Championship (SMX) launch.

In the historic Monster Energy Supercross and Pro Motocross merger, a combined five-year broadcast package will see consistency in all 31 rounds of the 2023 season being streamed on Peacock in the US with coverage that extends to NBC.

Furthermore, international viewers will be able to view each event live with an SMX Video Pass as riders compete for a lucrative prize pool, with $5.5-million of the total $10-million in prize money to be specifically allocated to the SMX playoffs and final.

The structure of the playoffs places a greater emphasis on each event throughout both series as riders are given a second chance of sorts to compete for championship glory if they make the cut.

With the increased importance of Supercross and Pro Motocross rounds, an emphasis is placed on riders being versatile across both disciplines, especially since the playoffs will be contested on hybrid supercross/motocross layouts.

“That’s what I love about the new partnership between Feld and MX Sports and the SuperMotocross World Championship format – it really puts the riders in a position to have to perform both supercross and motocross,” he explained. “Why? Because the more points that they can accumulate, they are going to be going to those two playoff rounds sitting in a really good position.

“At the end of the day, I think segregation between the two series wasn’t a good thing and I think, as a whole, we are all as one. I like that, I like seeing the riders work a bit harder in their shortfall areas, and take advantage of the areas they ride really well at.

“In general with the SMX World Championship, what I am most happy about is the unity between Feld and MX Sports, there’s one vision, one goal and the playoff situation – I can’t think of any sport that has a playoff scenario that doesn’t work. I think we can sit here and agree that all playoffs are a lot of fun to watch, it’s intriguing, the Peacock announcement is massive and everyone is going to benefit from this down the road.”

The 2023 AMA season gets underway at Angel Stadium, Anaheim, on 7 January for the opening round of Monster Energy Supercross. Later, Pro Motocross begins at Fox Raceway on 27 May, then after both series, the SuperMotocross World Championship playoffs will commence on 9 September.