Harlan called in as Nicoletti switches to SX2 category upon return. 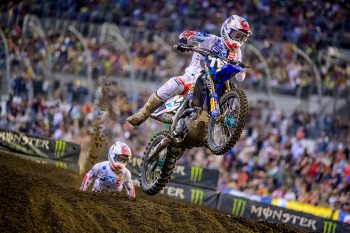 The FXR ClubMX Yamaha team has shuffled its 2022 World Supercross Championship (WSX) rider line-up ahead of Cardiff’s opening round next month, with Grant Harlan called in for 450 duties and Phil Nicoletti switching to SX2.

It was previously announced that Nicoletti would be in the WSX premier class alongside Cade Clason, however, he’s now named for the 250 category with Jace Owen in place of Enzo Lopes.

Nicoletti is only recently back on the bike after breaking his forearm for a second time in July and undergoing another operation, while Lopes – fifth in 250SX East this year – has also experienced complications with an arm injury he had surgery on following Salt Lake City’s Monster Energy Supercross finals.

Meanwhile, Harlan endured a difficult 250SX East campaign with a season-high result of 15th at Daytona, before stepping up to a 450 outdoors and impressing with 11th position at Fox Raceway 2. He had trained at ClubMX during the Supercross pre-season.

ClubMX is one of few organizations that will compete in the startup WSX Championship, as well as American Supercross and Lucas Oil Pro Motocross. It has signed Jeremy Martin and Garrett Marchbanks solely to its AMA program for 2023.