250MX cameo sets Musquin up to represent France at MXoN 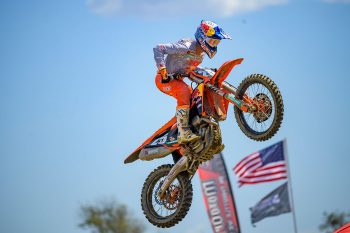 Making a cameo appearance in 250MX, Marvin Musquin labelled his outing at Fox Raceway ‘decent’ as he prepares for Motocross of Nations (MXoN) later this month.

Musquin signed with KTM Factory Racing this season on a supercross-only deal and finished fourth in the 450SX standings, with a victory at St. Louis to his credit.

Pala marked the Musquin’s first 250MX outing since 2015 when he finished runner-up in the series to Jeremy Martin. It was also his first Pro Motocross race of the season, and he qualified P9 ahead of the motos.

Race one saw the number 25 run third in the opening stages before relinquishing the podium to Hunter Lawrence on lap five with an off-track excursion, ultimately finishing fifth.

In moto two, the Frenchman was 12th after the first lap and worked his way to P9, landing him seventh overall on the day.

“I made the decision to race like a week ago,” Musquin explained. “We tried a couple of things this week with the team and had only five days on the bike. It was strange to be back!

“DV, my trainer, told me it would be great training for Motocross of Nations and that was just the goal to actually do the two motos. Obviously, it would have been great to get better results but it was a decent day.

“Second moto, I was in the pack and physically it was difficult, the muscles were just not happy, but I tried my best and ended up seventh overall. it was good training.”

The former two-time MX2 world champion will represent Team France on a 250F in less than three weeks, alongside Maxime Renaux and Dylan Ferrandis at RedBud on 24-26 September.