Direct updates from round 11 of the season in Indiana.

Follow the 2022 Lucas Oil Pro Motocross Championship with direct updates from round 12 of the season at Ironman through Racefeed. 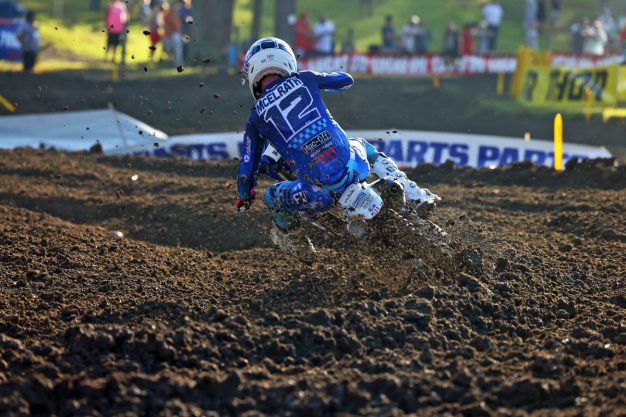 250MX moto one:
Moto one of the 250MX category saw Thrasher jump out front early and he led for a full seven laps, only for Jett Lawrence to climb forward from P5 in the early stages and take control when it counted. In the end, Lawrence’s winning margin was 6.911s over the resurgent Hampshire, who in turn was a further 4.8s clear of Hunter Lawrence in his return to the podium. Thrasher, meanwhile, eventually crossed the line fourth, with Shimoda fifth despite a late fall while challenging Hunter Lawrence for position. The top 10 included Cooper, Max Vohland (Red Bull KTM) after he challenged for the lead early, Kitchen, Guillem Farres (Monster Energy Star Racing Yamaha) and Cameron McAdoo (Monster Energy Pro Circuit Kawasaki). In terms of the points, Lawrence needs to extend his lead by 13 points over Shimoda today to clinch the title and he took another step towards that in the first moto, increasing his advantage by nine points already. Unfortunately for high-profile debutant Haiden Deegan (Monster Energy Star Racing Yamaha), he fell out of contention in the closing laps while circulating in P11 and it’s unclear if he’ll return this afternoon. It was also confirmed post-race that both Hunter Lawrence and Cooper were penalised two points each for jumping on a red cross flag.

450MX moto one:
The opening 10 minutes of 450MX moto one were led by Roczen, before red plate-holder Tomac took charge. Title rival Sexton had completed the opening lap in 10th and had to work his way forward, which he eventually did – despite a minor off-track excursion – and made his way by Tomac by lap 13. It wasn’t over, however, with Tomac countering two laps later and going on to win by 1.533s and take the critical points that go with it. Sexton was second and a late surge from Plessinger saw him climb to third, past Dungey and Craig inside the top five. Sixth was a solid effort from Anderson after he recovered from a first turn fall, followed by Roczen, Barcia, Freddie Noren (BBMX KTM) and Shane McElrath (Muc-Off FXR ClubMX Yamaha). The difference between Tomac and Sexton in the standings now sits at four points with three races remaining in the series.

250MX moto two:
Victory from Shimoda in the second moto of the afternoon denied Lawrence the chance to clinch the title with a round to spare, but 1-3 results were still enough from him to seal the overall. It was Cooper who took the holeshot this time out, only for Shimoda to soon hit the front and that’s where he would remain in going on to win by 6.553 s ahead of Hunter Lawrence, with Jett Lawrence third. Hampshire was fourth in moto two this afternoon, with Cooper eventually fifth. P6 through 10 featured Thrasher, Vohland, Jalek Swoll (Rockstar Energy Husqvarna), McAdoo and Hammaker. Deegan did make it back on track, but went down in the first turn and had to fight back through to 24th position to conclude his debut. The overall podium was Lawrence, Shimoda and Hunter Lawrence, while in the standings it’s Jett who leads by 41 points ahead of Shimoda, with Hunter a further seven in arrears with one round remaining.

450MX moto two:
A decisive second premier class moto effectively required Sexton to win and that’s exactly what he did, executing the start and taking charge of the lead almost immediately. A brief challenge from teammate Roczen was had on the opening lap, but from there it was smooth sailing, going on to win by 11.293s and take the title down to the wire at Fox Raceway’s finals. Tomac was runner-up this time out, while Plessinger was third once again following a one position penalty that was applied to Anderson. In fifth was a consistent day for Craig, followed by Roczen, Dungey, Stewart, Rockstar Energy Husqvarna teammate Dean Wilson and Noren. The overall belonged to Sexton after tying on points with Tomac, with Plessinger also making a welcome return to the podium. Tomac will carry the red plate into the final round by a single point, resulting in a ‘winner takes all’ scenario to determine this year’s champion.