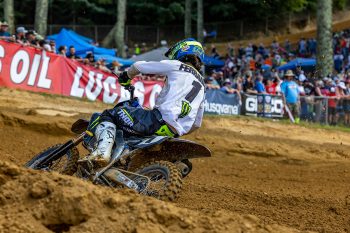 A frustrated Dylan Ferrandis has hit out at Justin Barcia following the move made in the second 450MX moto at Budds Creek that saw the Yamaha rider brought down and the number 51 disqualified.

Both riders were battling inside the top 10 in the final race at round 10, when on lap seven the Frenchman made a pass on Barcia through a right-hander.

The Troy Lee Designs Red Bull GasGas contender then ran slightly off the track which meant he entered the next left very tight, the line ultimately putting him on a collision course with Ferrandis.

“Budds Creek moto two I got T-boned by Barcia, pretty normal from him, but this time he went off track in the previous corner where I passed him, gained time off track and went straight into me and made me crash,” Ferrandis shared.

“At this point, I don’t really care about that but I just wonder how can his team, sponsor, family, friends, trainer, fan… can support that? Yeah, he got disqualified but he will do it again next weekend and every other race and nothing will change. No sportsmanship and a bad image for our sport. Very sore today I hope I can make it to the next race at 100 percent.”

The reigning 450MX champion was unable to complete moto two after the incident and finished round 10 P12 overall, crossing the line sixth place in race one. Barcia was eighth in the first moto and stripped of his points from the second. He responded to criticism following the race by sharing onboard footage from the crash and labelled the move a racing incident.

“Three sides to every story his, mine and the truth,” said Barcia. “Here is the GoPro footage showing I didn’t T-bone anyone and me going off the track and that the hit was a racing incident.”

It’s not the first time this year Barcia has received a penalty for a collision with another rider, as he was docked 10 points and fined following a heavy impact with Malcolm Stewart in the 450SX main event at Salt Lake City. Prior to that incident, he was fined and penalised three championship points for an overly aggressive move on Anderson at Indianapolis.