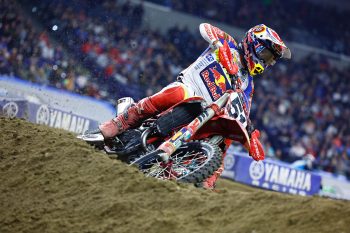 The TLD Red Bull GasGas rider will hold onto his second-place podium result, but was penalized after making an overly-aggressive move on Jason Anderson that saw the latter go down.

“Justin Barcia has received a three-point penalty and a $3000 fine from the AMA for his move on Jason Anderson in the 450SX main event,” a social media update from Supercross announced.

Barcia led the early stages before Monster Energy Kawasaki’s Anderson made his way by on lap seven, with Barcia countering and resulting in Anderson falling. He was later overtaken by runaway leader Eli Tomac (Monster Energy Star Racing Yamaha), settling into P2.

“I didn’t get the win, but second is pretty good – I’ll take it,” Barcia said. “The track was insane. Man, it was wild! That pass with Jason [Anderson], I’m going to have to watch it.

“It’s a bummer, I don’t want to see anybody go down. I’m happy with my race and I’m pumped and ready to go next weekend.”