‘We have some work to do following Unadilla’ – Stewart 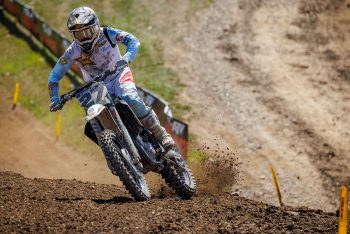 Following his Lucas Oil Pro Motocross return at Unadilla, Rockstar Energy Husqvarna Factory Racing’s Malcolm Stewart stated ‘we have some work to do’ as he looks to improve on P15 overall.

Lining up for his first AMA outdoors race in eight years, Stewart made his return to competition in New York after a knee injury sustained at Salt Lake City supercross forced him out of the first eight rounds of 2022 450MX.

The FC 450 rider qualified P22 and launched inside the top 15 in the opening moto, ultimately finishing the bout in 14th. Again in race two, Stewart hovered around the top 15 battle, dropping in the closing stages to cross the line P16.

“First outdoor race back in eight years and I think it was a good day just being back,” Stewart said. “Of course, the results didn’t show it, but just having that race back there again was really good for me.

“I’m happy to be back, but we have some work to do. I’m really looking forward to Budd’s Creek because that’s obviously one of my favorite tracks. I learned a lot, and you can’t replicate racing, so this is just a good race just to come back to – to get through it.”

Stewart’s next opportunity to charge towards the front comes this Saturday at Budds Creek, round 10 of the 2022 Lucas Oil Pro Motocross Championship.