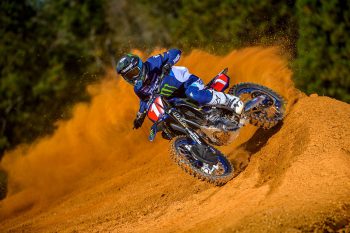 Reigning 450MX champion Dylan Ferrandis is targetting a return at the final four rounds of 2022 Lucas Oil Pro Motocross as he continues to recover from a thumb injury that brought a crushing end to his title defence before it even began.

Ferrandis crashed at Fox Raceway just days out from the season opener in Pala and required surgery on his left thumb which had a broken ligament with a stener lesion.

As a result, he was ruled out of the series indefinitely but has now revealed footage of himself completing laps around a turn track a month and a half after the surgery, while outlining his planned return for round nine of 2022 Pro Motocross at Unadilla on 14 August.

“Back on the bike six weeks after surgery on my left thumb, it’s still very early so only easy ride on turn track but I at least I can ride again,” Ferrandis shared. “Plan is to be back for the last four rounds of Pro Motocross.”

It has been a challenging year for the Monster Energy Yamaha Star Racing rider as his 2022 Monster Energy Supercross campaign was brought to a premature end after injuring his wrist in Detriot.