Wrist the cause of Ferrandis withdrawal in Detroit

Star Racing rider 'day by day' leading into next round. 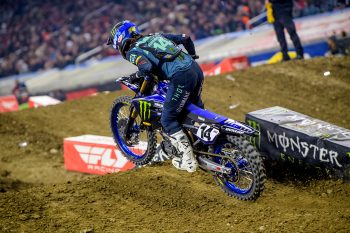 A wrist injury has been revealed as the cause of Dylan Ferrandis’ withdrawal from round 10 of Monster Energy Supercross, the Frenchman’s 450SX main event ending prematurely after casing a quad.

The number 14 suffered a difficult start in Detroit’s final, starting outside the top 10 before he worked his way up to fifth position. Coming up short on a jump forced his retirement from the race and he’s not yet certain to continue in Indianapolis.

“I felt good coming into the weekend and the day was going well,” Ferrandis commented. “I had a moment during my heat race, but was able to come back to sixth.

“In the main event, I didn’t get a great start but kept pushing and was fifth, then, unfortunately, went short on the quad and was unable to finish. It’s very frustrating to have another bad night, but we will go back to Florida and work to recover and come back next week.”

Team manager Jeremy Coker added: “Dylan was riding well all day and everything was going good, but unfortunately he came up short on a jump and jammed his wrist. He was evaluated at the Alpinestars’ Mobile Medical Unit and everything looked okay, but we are going to take it day by day.”

Ferrandis has seven races remaining to turn his indoors season around, currently P8 in the point-standings. Round 11 of the 2022 Monster Energy Supercross Championship takes place this Saturday at Indianapolis.