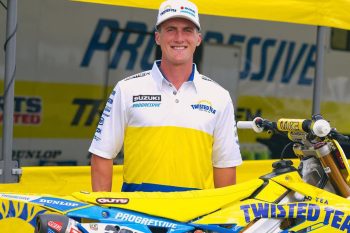 The remainder of the 2022 Lucas Oil Pro Motocross Championship will see Marshal Weltin as part of Twisted Tea HEP Suzuki, effectively in place of Justin Bogle from Saturday’s Thunder Valley round.

It was confirmed today that Bogle would be taking a break from the outdoors, resulting in Weltin gaining an opportunity alongside Brandon Hartranft on the RM-Z450.

“Twisted Tea/HEP Suzuki presented by Progressive Insurance is excited to announce the signing of Marshal Weltin, an experienced privateer for the remainder of the season,” the team announced.

“Weltin has spent his time in Europe and Canada racing at a high level, with a 2020 Triple Crown Championship 250 win in the Canadian series. Team Suzuki welcomes Weltin to the RM Army. Look for Weltin to compete on his Suzuki RM-Z 450 this weekend at the Thunder Valley National.”

Weltin had been riding his own privateer GasGas and scored a season-high of 15th overall at Hangtown’s second round last weekend. He’s currently P20 in the point-standings, two positions behind new teammate Hartranft.