Planned return to competition remains unclear at this point. 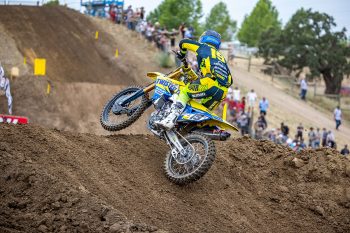 Bogle finished 20th in both motos for 22nd overall at Fox Raceway before an even more difficult day out at Hangtown, prompting him to sit out at least the upcoming rounds.

“With the support of his family and team, Justin Bogle of team Twisted Tea/HEP Suzuki presented by Progressive Insurance has decided to take a break from the 2022 Lucas Oil Outdoor National Championship,” a brief statement confirmed.

“The burden of a gruelling Supercross season, where Justin was one of only 10 athletes to lead a premier class main event while accomplishing multiple top 10 finishes, has compelled Justin to press the reset button and recover. Although no timetable has been set for his return, we look forward to seeing Justin back on the race track in the near future.”

The HEP team, through Pipes Motorsports Group (PMG), will enter the upcoming World Supercross Championship (WSX), which Bogle could be a good fit for when it’s due to commence from late September. It’s unclear if he intends to return to the outdoors.