Longstanding organization back on track for Pro Motocross. 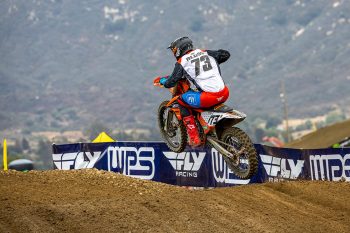 The BBMX team finally surfaced in the opening round of the 2022 Lucas Oil Pro Motocross Championship after drafting in the new-look line-up Benny Bloss and Fredrik Noren for the outdoor season.

It was a turbulent back-end of Monster Energy Supercross that saw the Butler Brothers-led organization split with title sponsor Rocky Mountain ATV/MC, as well as its initial trio of riders, Shane McElrath, Max Anstie and Joey Savatgy.

That all came following St. Louis, where the team was on location, but didn’t compete amid all kinds of speculation on its future, and then was absent for the remainder of the series. Now, a revamped BBMX program has secured Bloss and Noren in a bid to get back on track this summer.

Bloss had been part of the Team Tedder program riding KTM machinery in Supercross, taking a best result of 12th at Foxborough after missing the opening part of the season. Noren had been riding private KTMs, claiming a high of 11th at that same round.

It’s been reported that BBMX had received financial assistance from 83 Compound owner Mark McKenzie in the pre-season, however, it had been understood that any potential partnership there had dissolved during the team’s Supercross campaign.

The decision of Rocky Mountain ATV/MC to exit the team came abruptly mid-season following an absence from Seattle due to rider injuries, but team owner Forrest Butler has maintained throughout the drama that the team was intending to continue this year as it now is.

It’s also been relatively unclear what level of support the team had received from KTM in 2022 after BBMX had moved away from the ‘factory services’ lease program, instead utilizing its own development program with a selection of external arrangements this year.

Fox Raceway marked an encouraging return for BBMX, with Noren going 14-11 for 12th overall and Bloss recording a 15-13 scorecard for P15 at the opener. Former rider McElrath was on debut with Rockstar Energy Husqvarna and claimed 10th, while Savatgy’s fill-in deal with Monster Energy Kawasaki has been delayed and what’s next for Anstie remains to be confirmed.