Direct updates from round one of the season in California.

Follow the 2022 Lucas Oil Pro Motocross Championship with direct updates from round one of the season at Fox Raceway through Racefeed. 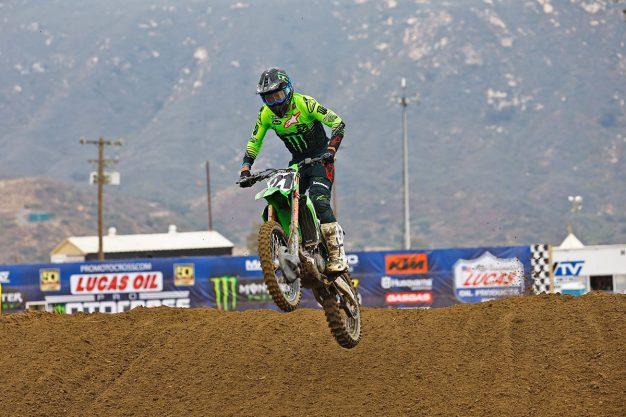 450MX qualifying:
While the likes of Ryan Dungey and Tony Cairoli stole much of the limelight coming in, it was Team Honda HRC’s Chase Sexton who stamped his authority on 450MX in qualifying to lead the way in both sessions. Sexton’s benchmark of 2m12.333s was set in the final outing this morning ahead of teammate Ken Roczen – the pair aboard 50th Anniversary Edition CRF450Rs today – however, there was near a full second that separated the pair. Supercross champion Eli Tomac (Monster Energy Star Racing Yamaha) is here despite his recovering MCL and went third on combined times, as Jason Anderson (Monster Energy Kawasaki) and Red Bull KTM guest Cairoli were fourth and fifth, respectively. Sixth was solid from new 250SX West champion Christian Craig (Monster Energy Star Racing Yamaha) in moving back up to the premier class outdoors, following by another Red Bull KTM in Dungey, Justin Barcia (TLD Red Bull GasGas), newcomer Garrett Marchbanks (Muc-Off FXR ClubMX Yamaha) and Benny Bloss (BBMX KTM). Notably just outside the top 10 were Shane McElrath in his first appearance with Rockstar Energy Husqvarna and Aaron Plessinger (Red Bull KTM) on return from injury.

250MX moto one:
It was a Team Honda HRC Lawrence 1-2 in the opening 250MX moto of the season, with Jett 6.688s seconds ahead of Hunter, as Hampshire made a late move for third. The early laps were led by Cooper until the younger Lawrence made his way by near 10 minutes in, with Hunter following suit soon afterwards and giving chase. Things started unravelling from there for Cooper, with Hampshire next to go by and then a whole group of riders following that. In the end, it was the Lawrences ahead of Hampshire, with Shimoda fourth and Kitchen the top five. Sixth through 10th included a fighting Forkner, Pierce Brown (TLD Red Bull GasGas), top-qualifier Hammaker, Mosiman and Stilez Robertson (Rockstar Energy Husqvarna), with Cooper fading all the way back to 11th in his first competitive appearance since Hangtown last season. Rockstar Energy Husqvarna’s Jalek Swoll went down and out of contention early with what appeared to be a shoulder injury, as McAdoo was also forced out after going down in the mid-stages.

450MX moto one:
After topping qualifying, Sexton continued his form by winning the opening moto, trailing Team Honda HRC teammate Roczen for the first half of the race before making a move and going on to win by 15.877s. Roczen was solid after setting the early pace and then settling into a podium result, while third was exceptional from Craig despite a tip-over early on, a battle with Dungey and a late challenge from Anderson. The end result for Anderson was an impressive fourth after clawing his way back from 17th at the end of lap one, while Dungey starred upon coming back to the sport following six years away with a top-five finish in moto one. Next up was Red Bull KTM teammate Plessinger in P6, followed by Tomac after he gradually dropped down the order out of podium contention, Barcia – like Anderson – also from well back in the opening laps, class rookie Marchbanks and Cairoli in a quiet start to his time in the US.

250MX moto two:
Another commanding performance from Jett Lawrence saw him make his way by debutant Nick Romano (Monster Energy Star Racing Yamaha) two laps in and control the balance, signalling his intentions for the season ahead complete with the number one plate. Lawrence’s winning margin by race-end was a full 5.381s, again followed by brother Hunter, who this time had to climb from P7 at the end of lap one. Hunter made his move on Shimoda for the runner-up result on the final lap, as Mosiman delivered a better ride this time out for fourth and was comfortably ahead of Hammaker in fifth position. Sixth matched his opening moto result for Forkner, followed by Brown, Kitchen, Hampshire – who was toward the rear of the pack at the beginning of the moto – and Max Vohland (Red Bull KTM) the top 10. Overall, it was Jett Lawrence who started his title defense in style ahead of brother Hunter, with Shimoda’s final moto result boosting him up onto the final place on the podium.

450MX moto two:
It was an all-Honda duel at the front in 450MX moto two as earlier winner Sexton jumped out front on lap one, only for Roczen to strike with that added early intensity. Come the final 10 minutes, Sexton finally countered and made this move count, going on to seal a perfect score by just 4.587s over Roczen. Third was yet again a remarkable result from Craig, keeping teammate Tomac at bay, as Dungey made it a pair of top-fives in his comeback ride for fifth. Next in line was Cairoli after making his share of progress between motos, with McElrath seventh. It was a case of what could have been for Anderson, recovering from a fall on the opening lap to claim P8, with Barcia and Plessinger in ninth and 10th. The round podium saw Sexton stand on the middle step, joined by Team Honda HRC teammate Roczen and with Craig taking third position.