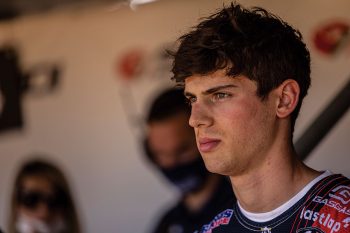 Red Bull GasGas Factory Racing’s Jorge Prado has been ruled out of the seventh round of the 2022 MXGP World Championship in Italy, the Spaniard dislocating his shoulder in a practice crash last week.

Prado’s shoulder was repositioned without any further damage following the incident, however, a lack of strength has ultimately ruled him out of Maggiora this weekend.

“I crashed in practice last week,” Prado explained. “It was not a very big crash, but I dislocated my shoulder. A shoulder specialist put it back in as quickly as possible and I am thankful for that. I’m working very hard right now, just to make sure that I can get back as soon as possible.

“Hopefully I will be at Riola Sardo, as long as everything goes well. That would be a big achievement for me! It is a pity that I cannot ride this weekend – I am second in the championship and in the fight for the title. Maggiora is a track that I like as well! I hope that I can put my GasGas back on track in Sardegna.”

The number 61 currently sits second in the MXGP championship standings and has scored three moto wins this season including the overall victory in Portugal.

Prado joins a growing list of front running contenders currently sidelined, with Jeffrey Herlings out for the season and Romain Febvre recovering from injuries sustained in the Paris Supercross.

No replacement has been named for the upcoming round, with Prado’s condition to be re-evaluated in the days prior to the Grand Prix of Sardegna on 15 May.