Anderson, Tomac speak out about unnecessary risk on press day. 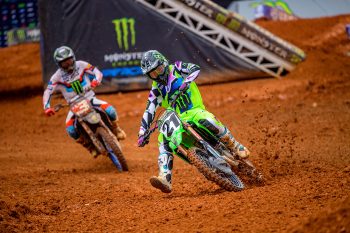 Both riders expressed their dissatisfaction with the unnecessary risk associated with that size obstacle, which ultimately led to the likes of Hunter Lawrence to fall spectacularly on press day.

“To be honest, right now I believe that 80 percent of the 450 class is out with injury,” Anderson explained post-race. “Then I think like [with that] 120-foot triple, I understand they want shock value for the fans to be like, longest start straight, longest triple, but at the end of the day, we’re four rounds away from the end. Let us get through the season… have good racing.

“We’re all going to have to hit the triple, but it’s going to rain too and we’re all still going to try and hit the triple. Luckily, the track ended up good – I just think the shock value that they’re trying to get out of some of the obstacles they put in is a little bit too much for us racers and our safety.

“At the same time, I understand where their head is at, but us as racers, we’re humans and we want to stay safe – we want to limit the risk. We know the risk that we take and when they make it a little bit bigger and we don’t really have control over that. It’s a little bit frustrating for me, personally.

“I hate to be the ‘Karen’, but at the same time, I feel like someone needs to speak or I need to speak. If something happened to me on one of those jumps, I’d be frustrated if I didn’t say anything…”

The Atlanta round of Supercross returned to the speedway facility for 2022. Not being confined to a stadium provided track designers more room to work with and effectively create a longer, faster layout.

Red plate-holder Tomac – who finished second to Anderson in 450SX in Atlanta’s main event – also shared his views on the design and the risk associated with such features implemented.

“This one specifically, it was over the top,” Tomac added. “I was one of the guys out there kicking and screaming about the big triple. For one, it was ridiculously long – 100-and-something feet – then two, they gave us no forgiveness to the landing. I was just like, if you are going to build something that big, at least make it to where we can be short without getting totally jacked.

“We do it the first session and I’m like, ‘wow that thing is pretty gnarly, pretty sketchy’ and then I go out there and you see the 250 guys go, I was pretty sure someone was going to crash. Then sure enough, Hunter goes over the thing and just explodes right on the landing. I was frustrated about it, and like Jason said, it’s unnecessary.”