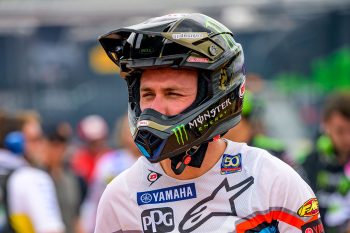 Herlings has been forced to miss the opening rounds of the 2022 series due to a pre-season incident that resulted in surgery to fix a broken heel bone in his left foot.

With number 84’s absence from the first five rounds effectively ruling him out of being able to defend his title, speculation has increased surrounding his entry into the US-based 450MX outdoors.

Alongside a possible Herlings entry, nine-time world champion Cairoli has been rumored to also be starting Pro Motocross in select rounds, as opposed to the entire 12-round championship.

Tomac – who currently leads this year’s 450SX standings by 53 points with three rounds remaining – has his attention firmly set on finishing the job in Monster Energy Supercross, but believes the addition of both riders to the outdoors series will make for added competition.

“Of course, I’m focussed on Supercross and want to keep plugging on with what we have got going on,” Tomac explained following Atlanta. “For those two guys [Jeffrey Herlings and Tony Cairoli], if they came over, it’s going to be awesome competition.

“All I can say is that it is going to be a lot of competition – it will be new tracks for them, but they are obviously really fast. I’m sure we will have some great battles if they do come over.”

Herlings made a guest appearance in the Lucas Oil Pro Motocross Championship in 2017 at Ironman, where he scored a perfect 1-1 scorecard to take the overall win on that occasion. This year’s outdoors series commences at Fox Raceway on 28 May.