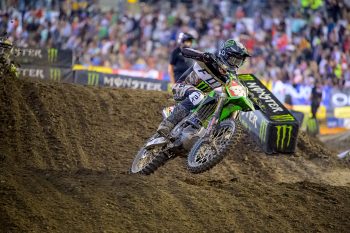 McAdoo challenged Husqvarna’s RJ Hampshire for the lead in heat one before getting it all wrong coming out of the tunnel, landing sideways on the second double as he approached the triple.

Luckily, the 24-year-old was able to get his KX250 under control before the peak of the jump and only relinquished one position to Jordon Smith (Fire Power Honda), but did hurt his knee during the save and was in a visible amount of pain following the main event.

“I had like a slight little mishap coming underneath the tunnel,” McAdoo explained. “I was going inside double, double and my knee kind of bent super-wrong, then I had lost my pegs, then after it had already tweaked backwards, my foot-peg came up under my knee brace cup and dug into the bottom of my knee.

“At first I was super-concerned… after the heat race I was super unsure. I’ve just had a knee injury last summer. It was kind of feeling a little unstable, I was pretty nervous, I had Dr G come over and help me out with it, he taped it up a whole bunch, but it obviously swelled up a whole bunch immediately.

“I think it is just pretty from getting smashed, once I got it moving around on the spin bike a little bit and, honestly, I was super-unsure of what it was going to be like, that’s why on the sight lap I went and rode and hit the jumps. It’s strong, I don’t think it’s going to be anything that will affect me long-term.”

McAdoo ultimately finished his heat race in third before a gutsy performance in the main saw him charge from seventh to secure the final position on the podium, losing only five points to race winner and joint red plate-holder entering the round Jett Lawrence (Team Honda HRC).

The current extent of the knee injury marks a sigh of relief for McAdoo, as a pulled ACL and fractured Tibia sustained in last year’s 250MX opener at Fox Raceway sidelined him altogether from the 2021 Lucas Oils Pro Motocross Championship.