Penalties applied for the pair gaining an 'advantage off-course'. 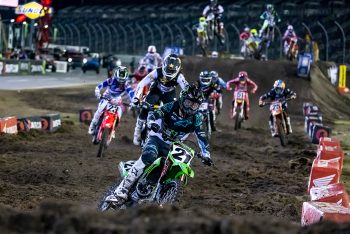 Following a second-consecutive collision in two weeks between Jason Anderson and Malcolm Stewart, both riders have been docked a position for gaining an ‘advantage off-course’ after their incident in the Daytona Supercross.

Anderson and Stewart made a strong start to round nine’s main event, each inside the top five crossing the hole-shot line, before the former bumped Eli Tomac a corner later – the impact resulting Stewart being pushed off-track.

After accelerating alongside the rhythm section and re-passing Tomac while off the circuit, Stewart then retaliated by collecting Anderson on the exit of the following corner, causing both riders to fall and lose multiple positions.

The opening lap incident didn’t mark the end of trouble for both riders, as Stewart later went ‘down’ – caught on a tuff block – in front of Rockstar Energy Husqvarna teammate Dean Wilson, with Anderson also caught up and crashing again as a result.

Ultimately, Stewart and Anderson were demoted a position each afterwards, meaning the pair finished eighth and ninth, respectively. The first lap collision was a critical one, particularly for Anderson’s title hopes, now 18 points behind red plate-holder and 450SX round winner Tomac, as Stewart was relegated to fourth in the 450SX championship standings following his result.

The initial contact served as what appeared to be payback of sorts after Anderson came together with Stewart in Arlington’s Triple Crown the week prior, both riders now needing to avoid further run-ins to limit points lost in the 2022 Monster Energy Supercross Championship.