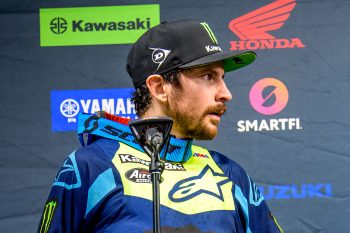 Form Monster Energy Kawasaki rider Jason Anderson has rued his costly ‘mistake’ in clashing with Malcolm Stewart at Arlington, rider error on his behalf taking them both down and denying Anderson of the Triple Crown overall.

Stewart had been leading the first of three races when Anderson made contact and took both riders down, enabling defending champion Cooper Webb (Red Bull KTM) to go on and claim his first win of the year.

Behind him, Stewart remounted to salvage fifth position, directly ahead of Anderson in sixth, before the 2018 450SX champion managed to rebound and win the remaining pair of finals to earn second on the podium. Stewart, meanwhile, went on to collect 6-3 finishes for P5 on the night.

Anderson attempted to speak to Stewart – the rider who filled his seat at Rockstar Energy Husqvarna in the off-season – but to no avail. Instead, it was a case of turning his mindset to the final pair of races, which he went on to win and continue his challenge for another premier class title.

“I tried to say something to him, but he was really heated,” he added. “I was like, I landed off that triple and I gassed it, and as soon as I gassed it, I was like, ‘I’m going too fast’. I really didn’t try and turn – I was trying to just stop. Once I made contact with him, it was over. I apologized to him, but he was kind of heated. That’s understandable… I just tried to brush it off and try and ride my race and move onto the next two.”